London: a video and a couple of tips.

This video is a 4-minutes mix of some of the most visited places of the British Capital; a few places I’ve been to countless times but in which, every now and then, I like to go back to relive a bit of those feelings I felt when found them out the first time.

So, in the images, you’ll see:

The Sky Garden [Fenchurch Street] the admission is free but you have to book at least 3 days in advance on the website, print and show the tickets to the reception. The entrance to the SkyGarden is located on the opposite side of the main one: no worries, you will find a security guard ready to show you the way. It’s definitely an impressive place, from which there is a 360 ° view of the City and East London, though – for me – the view from the London Eye is the most iconic ever (but of course, that is not free!). My impartial advice? Do not go there just to visit the roof garden – especially if you’ve already seen, for example, the Cloud Forest Singapore – or just for the view – for the reasons mentioned above – but bring there a special one for breakfast: surely he/she has never ate a muffin in a place like that!

Leadenhall Market in the middle of Leadenhall Street, Gracechurch Street and Lime Street

St Dunstan in the East [St Dunstan’s Hill] the remains of a church in 1100, transformed into a quiet garden in the heart of the City, of which The LondonHer.it made me fall in love before seeing them.

Girl with a Dolphin, the famous fountain located in St. Katharine‘s Way, photographed by millions of lenses: in fact the background is not that bad!

More London Riverside where there’s the City Hall and along which we kept walking up to the Millennium Bridge and make a quick visit to the Tate Modern.

All of these places, including the must-see Brick Lane with its graffiti – as you can see in this map – are very close to each other: you will pass from the modern skyscrapers and the majestic historic buildings of the City to the old brick warehouses – now luxury lofts and trendy bars overlooking the River Thames, – and to the most scruffy and alternative lanes of the East End. 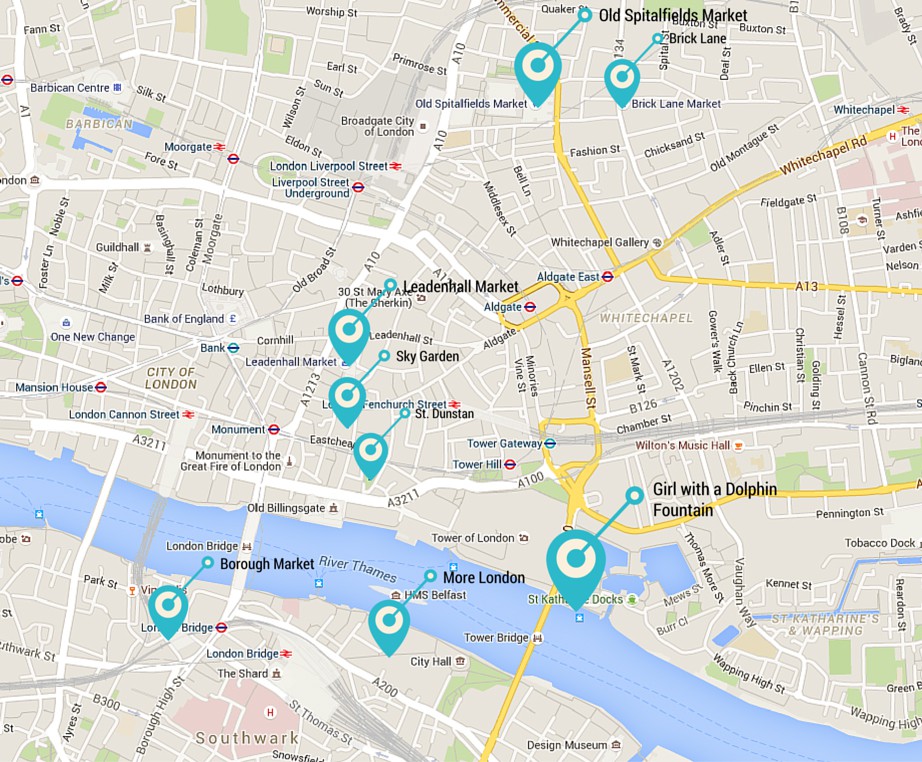 In sequence, a tour through the stalls of three of the most popular markets: remmeber that a visit to London is not complete unless you are immersed in the smells and colors of food stalls, clothing and vintage trash, both useless and beautiful objects, struggling to carve yourself out a little space among hundreds of people wandering aimlessly:

Camden Townv up to the Little Venice‘s canals where I met my ex-flatmate, I had not seen for a couple of years: from that moment on, I put away my GoPro and camera and a stream of chatter began, reviving old memories and sharing recent and future projects.